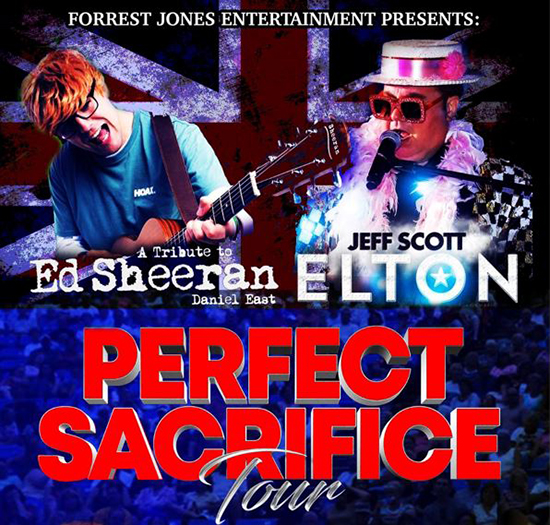 Jeff Scott has been performing the music of Sir Elton John for over 20 years. Based in Toronto, he may be one of the best Elton John Tribute Artists in the world. The show features colourful costumes, skilled piano playing and those distinctive Elton John vocals. And by channeling the star's flamboyant look, style, and mannerisms, he makes audiences feel they are in the presence of "musical royalty". Many say it's like seeing Elton John in his prime. And out of all the tribute artists lusting after the role, it was Jeff who was chosen to perform as Elton John at the North American Premiere of the "ROCKETMAN" movie, at the Toronto International Film Festival Building...A star indeed! The repertoire features so many of Elton John's hits...the songs we all know and love covering over 4 decades of music.

Daniel East is based in the North West of the UK and has been travelling the world as Ed Sheeran since 2015. Armed with a Boss RC 300 loop pedal and signature guitars, Daniel is believed to be closest to the real deal. East performs all of Sheeran's top hits, such as "Castle on the Hill", "Shape of You", "Perfect", "Photograph", "Thinking Out Loud", "I Don't Care" and more! You'll be immersed in all things Ed Sheeran, with a surprise twist that will leave you wanting more!


Prices include taxes and service charge